Today we are going to take a look at how you can update Docker Compose on a Synology NAS.

3. After you SSH into the device, run the command below to determine the version of Docker Compose you’re currently running.

4. Navigate to where the Docker Compose directory exists.

5. Back up the current directory by renaming it. This will keep the folder on your Synology NAS, but will not be overwritten by the update.

6. Now that the directory has been renamed, we can run the script below which will automatically update Docker Compose. Please note that as of the writing of this tutorial, version 1.27.4 is the latest release. I would heir on the side of caution and not install anything other than the Latest Release, but you must update the version below (written in red) with the latest version. You can find the latest version at this link.

NOTE: If you update to a version that doesn’t appear to work, delete the folder by running the command below, then rerun the command above with the prior version.

8. Docker Compose is now updated! You can run the command below again to confirm that you’re on version 1.27.4. If you’re interested in learning why you might want to use Docker Compose as opposed to Synology’s Docker GUI, I explain it in greater detail in the video instructions!

As always, thank you for reading the tutorial. If you have any questions, please leave them in the comments!

DSM versus QTS! Synology versus QNAP! Try Before you Buy! 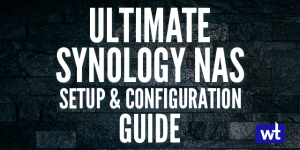