Skip to content
Today we’re going to look at the Synology RAID calculator and explain why this should be the first step you take any time you purchase a Synology NAS. When you purchase a Synology NAS and then get ready to set it up, you’re going to have to create a storage pool and volume. When you create those items, you’re going to be tasked with selecting a RAID type, which is where the Synology RAID calculator is helpful. In general, you want to ensure that you have some form of redundancy. Redundancy ensures that if one of your hard drives were to fail, your NAS would be able to rebuild that drive using the other drives currently available. For example, if you set up RAID 5 with four, 10TB hard drives and one of those hard drives were to fail, you’ll be able to remove the bad hard drive, then use your Synology NAS to rebuild a new hard drive. Following this approach, you’ll experience no data loss and after the NAS finishes rebuilding the new drive, you’ll be in the same place you were when you first started. This article will help explain what Synology Hybrid RAID (SHR) is so that you can determine if you’d like to use SHR or RAID.
Table of Contents show

What is Synology Hybrid RAID (SHR)?

Synology Hybrid Raid is an automated RAID management system, which is a fancy way of saying that you will have the flexibility to use different-sized hard drives in a RAID array, while actually utilizing some of the storage space. SHR is based on a Linux RAID system. SHR is a tremendous benefit as it allows you to mix hard drive sizes. This gives you the flexibility to utilize smaller-sized hard drives initially, and eventually upgrade to larger-sized hard drives if desired. The main benefit of SHR from a user’s perspective is flexibility. If you intend on using the same-sized hard drives and absolutely never mixing drives, you can use RAID 5 and from a usable space perspective, it will match SHR. It’s also extremely important to highlight that SHR is fault-tolerant. This means that if you were to lose any of the hard drives due to a mechanical failure, you will be able to rebuild your RAID array entirely. This is an important point to understand, as losing a larger-sized hard drive in an SHR array will not cause data loss. Finally, an SHR array can be created with a minimum of two hard drives with full drive-failure protection. On the other hand, RAID 5 must have at least three hard drives installed. This is a big difference, as many people won’t fill their NAS with hard drives immediately.

A traditional RAID array will utilize the smallest drive in a storage pool only, meaning that larger drives will still default to the smaller-sized hard drive’s storage space when creating the RAID array. The only way to increase the size of the storage pool would be to match all drives to be the same size. SHR is different in the sense that it divides the drive’s storage space into small chunks which allow additional storage space to be used. SHR is not proprietary, meaning that you can technically mount an SHR RAID array in Linux if necessary. It’s not out-of-the-box functionality, but it can be done if desired.

There are four RAID types that I generally recommend: Overall, RAID 5 and SHR are very similar and RAID 6 and SHR-2 are very similar (we will look at the differences below). RAID 5/SHR allows you to have one hard drive fail while maintaining the integrity of the data, while RAID 6/SHR-2 allows you to have two drives fail. If you have a two-bay NAS, using RAID 1 is a good option, but please keep in mind that you will only have one drive of usable space.

Difference Between RAID 5 and SHR (SHR vs. RAID)

RAID 5 is extremely simple. The total storage space will be determined by the drive that has the least storage space. We will look at this example below: In this example, you have 30 TB of total space, however, you will have 12TB of usable space in RAID 5. 4TB will be saved for redundancy and 16TB in total will be unused (as you are using two, 12TB drives but also using two 4TB drives). Once again, this is because the drive with the least storage space will be used, and one drive will be reserved for redundancy. I like using this example because from a usable-space perspective, you’ll have the exact same totals as simply using the first two 12TB drives in an SHR array. However, using SHR with the drive totals above will give you 20TB of usable space and 12TB of redundancy. 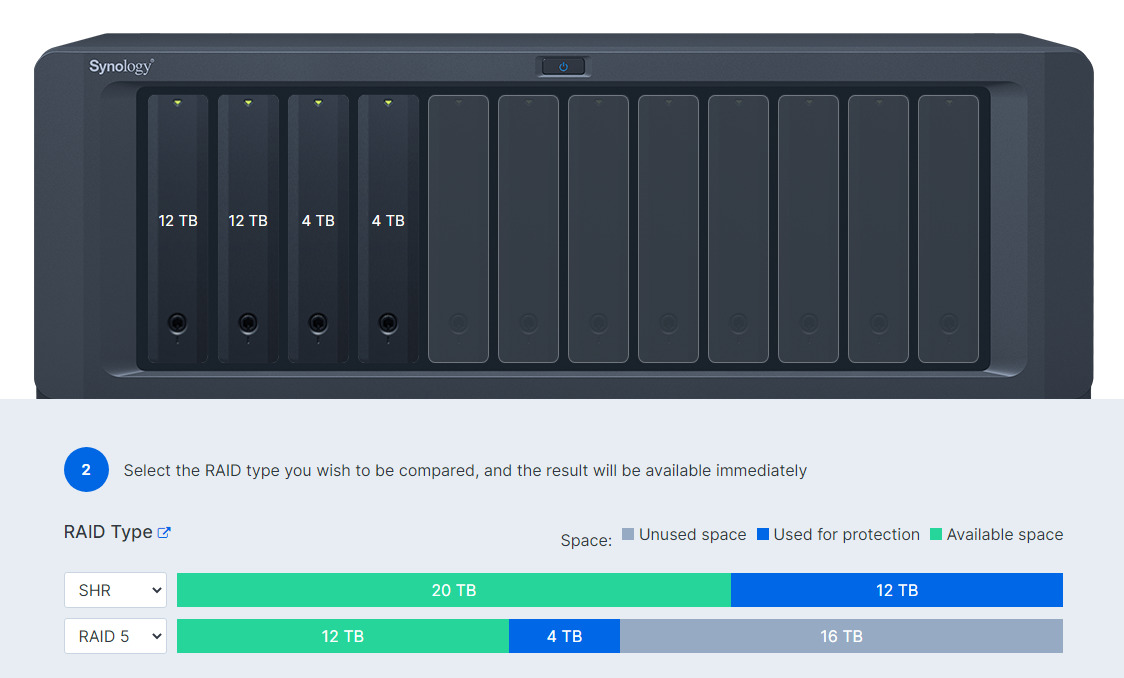 The example above is from Synology’s website using the Synology RAID Calculator. This is one of the main reasons why using Synology Hybrid Raid (SHR) is superior for users who are using mixed drives. If you’re using the same-sized drives, you won’t benefit from SHR (unless you’d like flexibility moving forward). The reason is well-explained by Synology and is something that I suggest you read and understand as it will help explain how Synology Hybrid Raid (SHR) and RAID 5 differ. As noted earlier, you can use RAID 6 or SHR-2 as well, with the principles from above being true. The main difference is that you will have two drives that can fail rather than one. Using the Synology RAID calculator (and an example of four 12TB drives and two 4TB drives), you can see that SHR-2 will give us 32TB of usable space with 24TB of protection rather than the 16TB of usable space, 8TB of protection and 32TB of unused space that RAID 6 gives us. 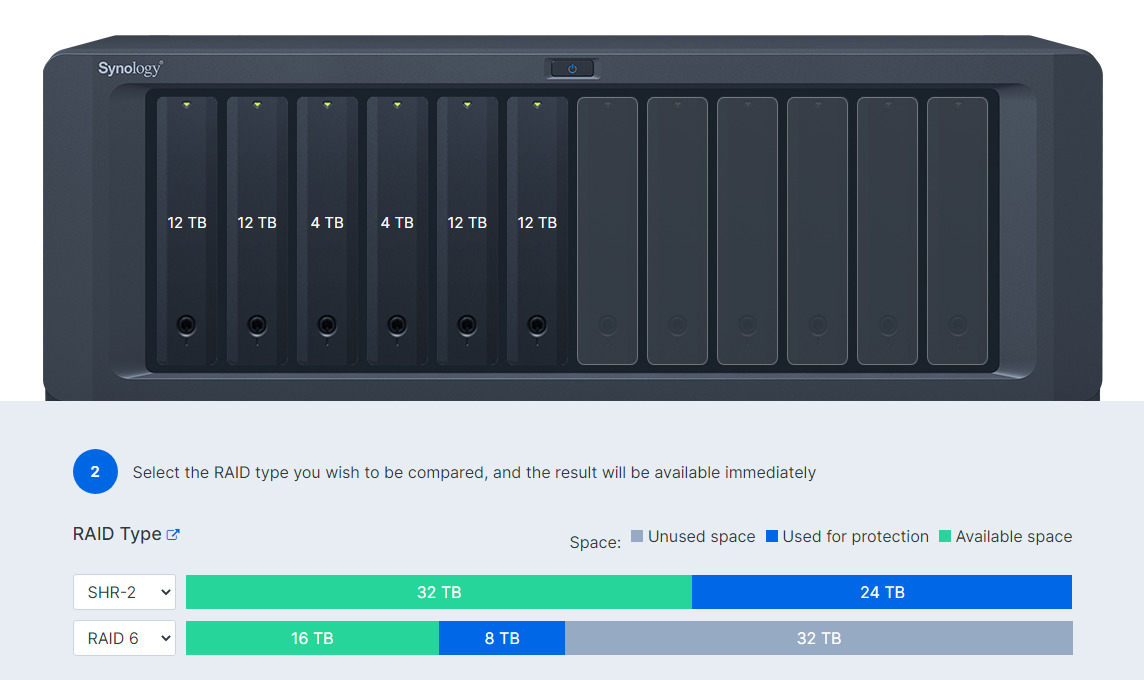 Use Docker to Set Up Plex on a Synology NAS

How to SSH into a Synology NAS